LX1AJ, Charly Hausemer, of Differdange, Luxembourg be came a Silent Key on April 7th. He was 89. Charly was 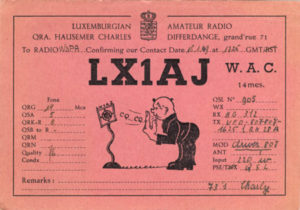 Luxembourg’s oldest Amateur Radio operator and had been licensed for more than 60 years. LX1AJ was one of the first to be licensed in Luxembourg. He was one of the originals who help start Amateur Radio in Luxembourg and Luxembourg’s IARU Society, Reseau Luxembourgeois des Amateurs d’Ondes Courtes. Charly was an avid DXers and had worked almost every DXCC country on SSB. LX1AJ was a major contributor to getting contest station LX7I on the air. Our condolences to the Hausemer family and to Charly’s nephew LX2A (ex LX2AJ), Philippe Lutty. Charly was a great influence to Philippe and introduced Philippe into Amateur Radio and always supported him in this great hobby.

From the estate of W3PA

We are happy to receive donations
for the great rebuild of LX7I: